Goodbye to Margs and Dave 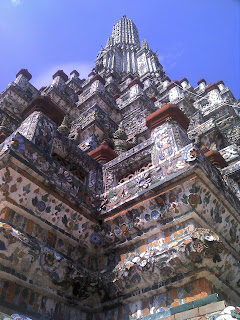 Just said goodbye to Margs and Dave as they start their long journey home.
Had a nice morning catching the local ferry along the river and stopping off to visit a couple of temples.
We made the journey back to the hotel memorable for them by not realising there would be a huge traffic jam on the route.
We had to jump out of the taxi and march at top speed, in the hot sunshine for well over a mile to the underground station, catch the train for four stops, and then quick march the other end as well.
Luckily they made it in the nick of time for a quick shower and then a slightly more leisurely march back to the station half an hour later.