Swimming in the rain 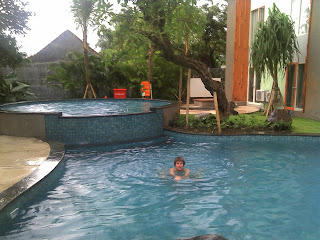 When we thought we might not get to Bangkok at all yesterday we were not too disappointed as we had a plane to catch this morning at 6.15 and it would solve a few problems if we missed it.
We were due to fly to Bali, but over the last couple of weeks we had both been searching the internet and neither of us could find things we wanted to do there. Everything looked really expensive, there was no public transport or cycles to hire, and lots of people gave negative reports on blogs and tripadvisor.
Every where else we have had the problem of too many places we wanted to see and too little time.
Anyway we got to our Bangkok hotel at 23.30 and decided we would go to Bali afyer all, and left at 04.00.
Arrived in Bali without a hotel but eventually booked a nice one, just away from the main tourist spot which is called Kuta.
Had a lovely swim in the afternoon downpour and then set off to explore.
I cannot tell you how bad this area is. Tripadvisor says it's much nicer than Kuta, but we reached the beach and it was full of rubbish. There wad no way I would dip even a toe in that water.
Also, the roads are full of potholes, the pavements don't exist so you have to struggle in the gutter, and there are motorbikes racing everywhere- I was so surprised.  Then we found a shopping mall and a western man standing with big banners saying 'save Bali'. I asked him what from and he said 'from drowning in it's own filth!'