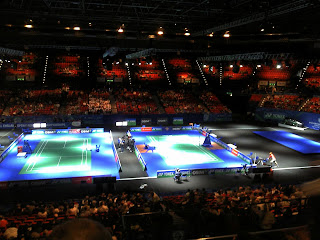 Exciting day today! Had to miss the Colwick parkrun as we needed to get on the road quite early, so instead went for a run with Darren along the canal, the Trent and The Meadows.
Semi finals day at the All England, but no English players left in to cheer.
The best and loudest supporters were the Malaysians who were there to cheer the fantastic Lee Chong Wei. They even had musical instruments and loads of flags and the atmosphere was great.
Next came the Danish who mainly sat in a block together, all dressed in white and who did synchronised clapping and chanting.
The worst were the Chinese who made up at least 50% of the semi finalists, so maybe they are so blaze that they don't need to bother.
Took a good photo of the stadium but really bad ones of the players, and in view of the terrible shots I published yesterday, I am not going to include any. I even recorded it on the telly and tried to take photos of the players on pause, but it still didn't work.
Sorry - a bad workman blames his tools. Will do better tomorrow.
Posted by Christine at 10:46