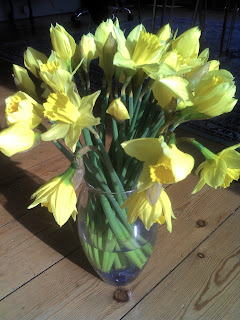 Bought these lovely daffs for £1 from the stall just outside Santander bank after having a bit of a run in with the staff over 'data protection' issues which are too dull to go in to here.
Instead, I thought I would tell you about how clever my 'pet' ducks are!
I have put netting over my ponds to try to keep away the herons, and thought it would stop the ducks visiting as well.
It did at first, but then they started swimming on the little area of pond with no netting over it, but they gradually worked out how to go under the edge of it.
Now they have sussed out that they can 'duck' - sorry - under it and as long as they keep their heads and beaks down, they can carry on making as much of a muddy mess as last year, and then climb out again when they have finished.
Has much research been carried out on duck intelligence? Maybe they are as clever as dolphins.
Posted by Christine at 11:23