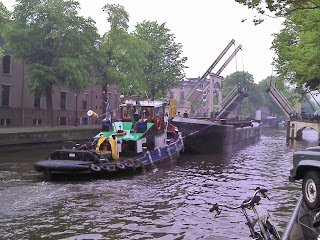 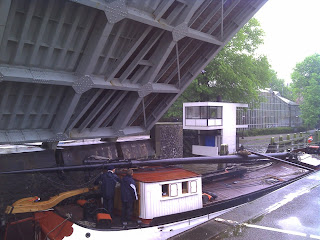 Out in Amsterdam this morning and watching a large barge go through the canals. They have a tag team of two officials who they have paid to cycle alongside them and open the bridges, which are actually bits of road that cantilever vertically, as they go.
It is really interesting and they are travelling at about walking pace so we have followed them for quite a distance.
Just behind them is a slightly smaller boat called the Christina.
I assume they haven't paid for the bridge opening service as the workmen are ignoring them and starting to shut the bridges as they go through.
It got very worrying at one bridge though as it was closing very quickly and the driver started shouting 'no' very loudly. There was then quite a heated altercation, unfortunately all in Dutch, but we got the gist of it.