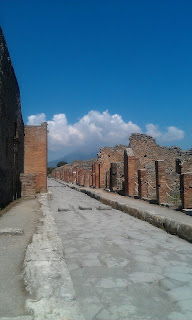 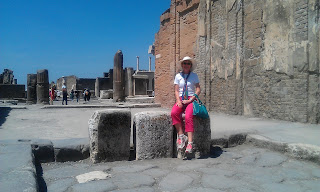 Enjoyed an outing to Pompeii today and this is a completely misleading view of the main street. We have chosen a split mili second to take the photo where all of the hoards of tour groups just happen to be elsewhere.
In the background, partly hidden by cloud is Mount Vesuvius that caused all of the problems in 79 ad.
Amazing fact - the volcano is now 1,283 metres high, but before the eruption it used to be about 3,000!
Another fact, the town planners had obviously encountered problems with traffic, even in those days, as they had one way streets with signs showing the direction on them. Also, the main square was traffic free with large standing stones to stop anyone nipping round on their chariot.