Looking sophisticated at Positano - not 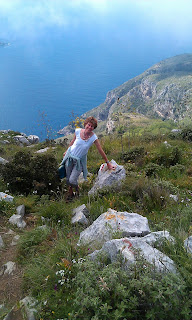 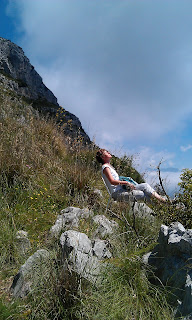 Planned to go to Positano today, which is the most classy and expensive resort in this classy and expensive area. However we got to the bus stop and found it was not running as the road was closed.
This was a real shame as I had made a bit of an effort and had on my new sandals, necklace, fancy Capri pants and blue `Prada` handbag.
We decided instead to go for a little walk and we followed a footpath that we chose because we thought it fairly flat.
Nothing could be further from the fact and we climbed over rocks and branches over the top of a mountain, round vineyards and fields and up and down thousands of steps!
Here is an example of the terrain and then a surprise find of a chair at a fantastic viewpoint in the middle of nowhere.
Did 17 k in total, but still found time to bag the Italian big four - cappuccino, pizza, wine and ice cream!