A night of two halves 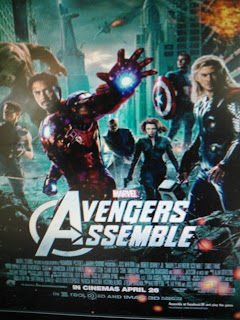 Started last nights entertainment on a high point with dinner at Fothergills, which is next to the Castle. Freezing cold and rainy night, but enjoyed a lovely starter of onion soup which warmed me up nicely for the evening ahead.
After dinner it was still pretty early as we had dashed out in time to catch the early bird menu. We also had to walk back past our house to get to the Savoy so in an unusual twist, we decided to nip home to have the shower we didn't have time for earlier, and to do a bit of paperwork.
Suitably refreshed we set off to the pictures.
There was a huge queue and I was perturbed to find they were nearly all young male students.  Not sure we would have the same taste in films
However, it started okay, with about 20 minutes of people mainly talking to each other, including Samuel Jackson, who I really like, so I thought all would be well.
Then it changed to endless fighting scenes with computerized aliens fighting the Incredible Hulk, a man in a big metal suit and a god called Thor, amongst others.
It went on and on and on, but the rest of the audience were all watching intently, and laughing in the right places, so I do know mine was a minority opinion.
Suddenly at a tense part the screen went completely dead. Fantastic, I thought, it was a weird ending but let's go home. But no, after about 30 seconds it carried on again, probably for about another half an hour.
It all ended predictability, and has set itself up for a sequel.
Avengers Assemble - probably not my favourite film of all time.
Posted by Christine at 04:03