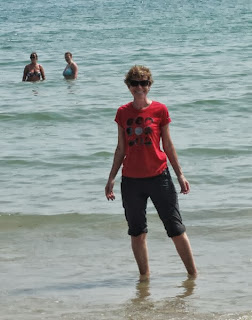 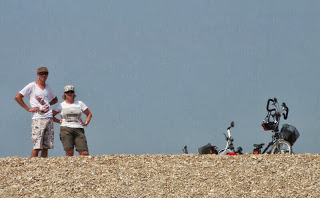 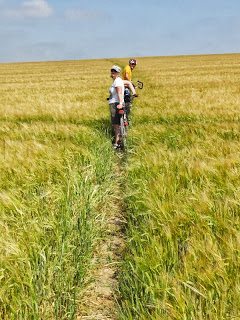 Interesting ride today from the campsite. We set off cross country to find the South Downs Way. This was harder than expected and involved cycling along rolling bridle paths that were made of rutted chalk soil with stones and boulders included.
We eventually got to a wheat field where the path was less than a foot wide, but we persevered and fortunately, at the top of the hill was the South Downs Way.
This was even more chalky, bouldery and hilly than the route up to it, but the views were excellent.
We decided to leave it after a few k and head on down to the coast, along with most of the population of the south east.
Once there I had to have a paddle, while Margs and Dave looked on in bemusement from the top of the stoney dune.
Finished off at a pub with a folk music duo playing in the beer garden, accompanied by a tap dancer.
45 kilometres today.