Does everyone hate insulation

Spent the day cutting up insulation and what a horrible thing it is. A few months ago we bought some of the fluffy kind that smelt of fish, and that was the worst ever. We have some of it inside the wall on the stairs and it still smells even now .
The stuff I was using wasn't as bad as that, but the first lot was 150mm, or six inches thick, that took loads of cutting. My saw kept bending so I never ended up with straight edges, so there was lots of sawing of edges before I could eventually jam it in. 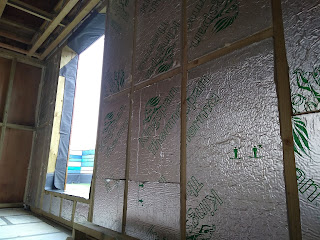 Next was the fluffy stuff (non fishy fortunately), that I pushed into various cavities around the site. This is the one with the little fibres that get everywhere, so I had on a face mask and goggles that kept steaming up.
Finally I started cutting up 100mm, or 4 inch sheets that were much easier to handle. All was going well and I was quite enjoying filling in the outside of the staircase. 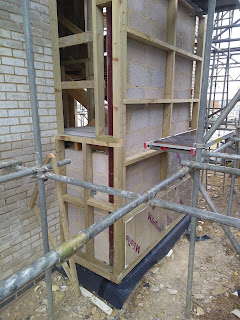 Then I got a bit over confident in my own abilities and decided to cut two pieces at the same time so as not to waste any of the sheet.
Obviously, neither of them fitted, so I did a bit of talking to myself, and then packed up for the day.
Will try again tomorrow when my brain has had a bit of a rest.
Posted by Christine at 10:36