We have now taken down the little shed and the front garden is opening up. 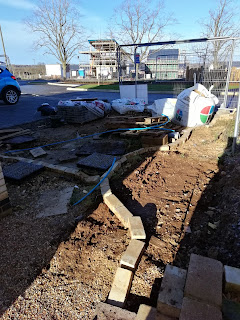 I am going to carry on with the little walls theme from the back garden, and did a count up today of the estimated number of bricks that I need.

I have been collecting bricks from the back garden by digging out some of the bricks around the grass and greenhouse ready to repurpose them at the front. I did a mini count up a couple of days ago and thought that I had enough, but thought that I should recheck my figures.

I have set some bricks up in a rough design, and there is about 44 bricks in each row. I need a minimum of three rows, but some need to go up to six or seven. We are looking for about 150 bricks, but my brick pile had only 114 in it.

I had quite a panic and had to start rethinking the whole design, when after about half an hour I suddenly realised that I had not included the 44 bricks that are already laid out! Panic over, I now have 155 bricks after all.

Fortunately Darren is much more on the ball and he spent the day putting up the glass balcony. 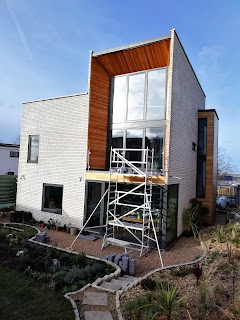 He had to make a couple of emergency trips to Toolstation to collect drill bits and screws, but by the end of the day it was coming together. 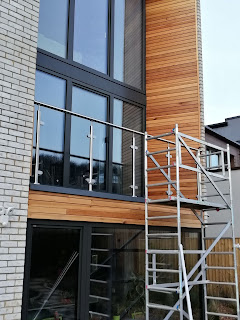 Hopefully tomorrow the glass can go in and all of the screws tightened up.