In 1215 King John signed the Magna Carta at Runnymede and 806 years later we were in that exact same place. Spooky!! 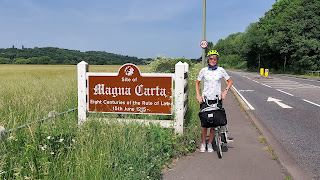 And that was one of the highlights of our day today.

We set off from Kew and cycled to Richmond, then caught a train to Staines with the idea of cycling along the river Thames. It does appear that this isn't possible, and we spent a frustrating day seeing the river very occasionally, but mostly cycling along busy roads very near to it, but not actually seeing it.

The Magna Carta section was particularly busy, but the history was interesting and the weather excellent, so it was all good really.

We then cycled to Bray where Heston Blumenthal has his restaurant called 'The Fat Duck' that we couldn't find, and a coffee shop called The Post Office that was closed because the weather had been too hot. Or so the notice on the door said when we tried to stop for refreshments.

Later I was looking forward to a cycle up the Great Walk at Windsor, but that wasn't allowed, neither was even walking with a bicycle! See notice on photo and Windsor Castle in the distance. 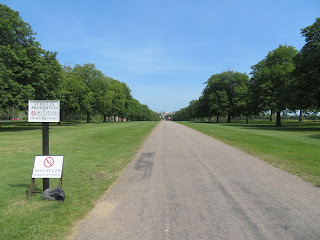 We cycled into Windsor Town though and enjoyed our leftover pizza from last night in front of the Queen's windows. If she happened to look out then I am sure that she would have been jealous. 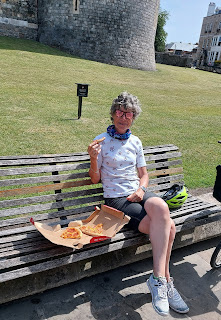 Saw a nice model of a Hurricane along the route, and then cycled back to High Wycombe and caught the train home. 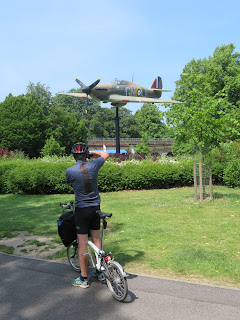 Still can't believe how fantastic fun the Brompton's are.