Today we decided to drive a few miles to the nearby canal and walk a 16 kilometre loop along the canal and back via roads and pathways.

The canal was lovely with lots of narrow boats, locks and even a lift up road bridge. 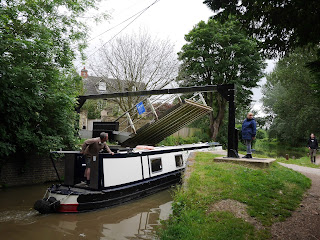 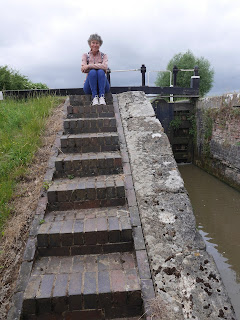 It was an easy walk along the canal and then we briefly walked along a road before turning off on to a footpath. It quickly became obvious that no one had walked along this particular footpath for a long time, and we were faced with a large field and no path at all. Darren has an app on his phone that works out the route and then tells you the way as you are walking, so we set off following the app through the middle of the field until we came to a gate. 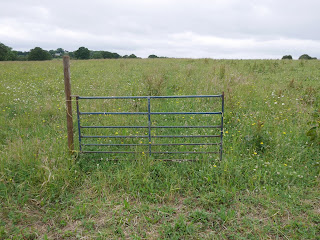 It stood all on its own in the field with no fence or hedge in sight, but the app said that we needed to go through it and straight ahead. We did this and eventually came to a wood with a style, but on the other side the nettles were waist high, so we decided to go round and meet the path again at the end of the wood. 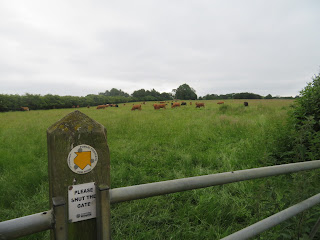 We were met by a footpath sign through a field, but it was full of big, scary bullocks that were quite interested in us. There was an electric fence keeping them in one part of the field so I decided to crawl underneath it and follow along the other side. Darren soon decided to follow, but he didn't duck as low as me and I had to shout out a very quick warning as his back was almost touching the fence.

Eventually we did find a little path, got back to the road and then to a Yurt Cafe for lunch. It was actually a very fancy yurt and we had to eat outside because we hadn't booked. We paid a fortune for  butter bean bruchetta followed by a scone with jam and cream. The very nice and posh waitress then appeared behind Darren just as he was saying that a Tescos meal deal would have been better, but she politely asked if we were enjoying our meal, and he politely told her that we were.

We then got back on the route for the last section and walked along country lanes and fields. We passed an amazing ruined building which I thought might have been a ruined monastery, but I can't find it mentioned on any map, so that is probably completely wrong. 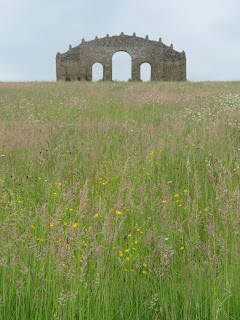 Finally we got back on to the canal past lots of parked narrow boats, some with imaginative decorations, and then back to the car. 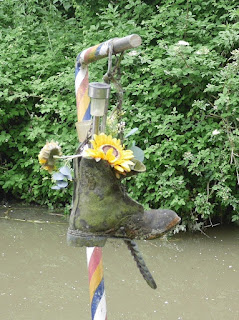