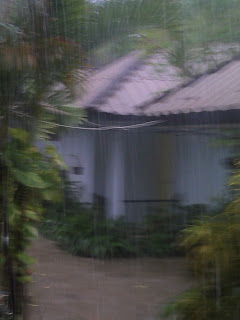 There might be an issue with the blogs for a few days as at new hotel and not explored far yet but we seem to be in the middle of nowhere.
Incredible journey here - started out great in the last blog but then changed to a mini bus full of French people and with no space for any luggage and with it stacked down the aisle.
The driver then kept stopping along the way, first for huge piles of newspapers that were crammed in, then detouring to the airport for some local people, at which point one of the Frenchmen refused to let them on saying it was already full! The driver got really annoyed and started throwing bags out, so in the end they got on as well. As we went along the driver stopped many times to deliver parcels and newspapers and when we got to the island of Koh Lanta he basically threw half a dozen people off, including all of the French people and told them to get a taxi.
He took us to our place though and now there is a massive rainstorm so we are in our room drinking Singha and watching the China Open badminton - bliss!
Posted by Christine at 04:29