Flood in Hoi An 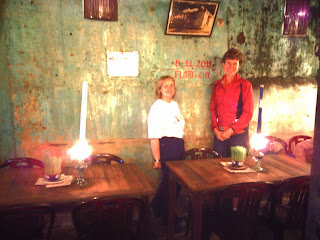 Terrible weather but beautiful Hoi An. Arrived today after a four hour bus ride from Hue. It threw it down all morning, but has stopped for the afternoon.
Found a lovely bar by the river and checking out the height of the flood water on 8th November 2011!
Just to the top of Margs head, but I would have been fine. The high water mark in 2010 was only about waist high, but in September 2009 it was not far off the ceiling.
The owner told us he was only shut for about 10 days this year and then they were open for business again.
Posted by Christine at 05:36