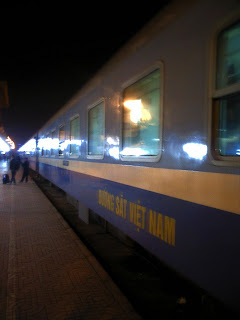 Update from the cafe - price of the coffee was fine, I should be less cynical!
Had an hour to casually wander back to the hotel to catch the train.
Unfortunately we set off in the wrong direction and ended up in the tiny residential streets where there were no road signs, no taxis and no one spoke English. We were still lost 45 minutes later and by then were running along the side of the street with the motorbikes heading straight for us. With 10 minutes to go we got back to the cafe and started to run in the opposite direction. After another five minutes I was in front and recognised a restaurant on the other side of the street where we had eaten previously. I pointed it out to Darren then shot round the corner going the other way. He saw me wave so headed to where I had pointed, so suddenly we had lost each other!
Got back to the hotel with a minute to spare and calmed down slowly on the train.