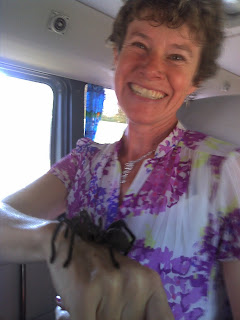 Went on a bus from Phnom Penh to Siem Reap. It was over 300 k and took all day.
Thyda took us to a market that sold fried crickets that everyone tried, and liked, except me. She also bought live tarantulas to fry later and Darren held one of them on his hand in the market.
I was in such a panic that the photo I took of him chopped his hand off!
I held one for about 10 seconds once I was reassured it was quite docile - but I was starting to hyper ventilate.
Posted by Christine at 03:51