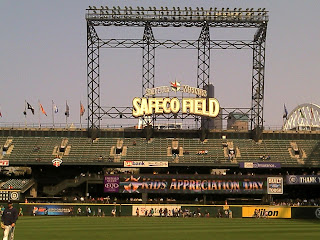 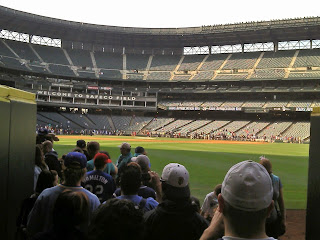 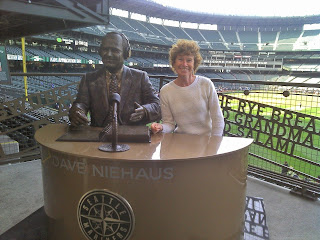 Arrived back in Seattle and caught a bus to the Amtrak station. Left our luggage there and walked almost next door past the Seattle Mariners baseball stadium. They had a game starting at 1pm so we bought tickets and went in.
Surprisingly it was kids appreciation day and we joined in the kids parade that went right down to the pitch and walked all the way around it.
We watched the players warming up and there was one thrower right next to the walkway who looked really good.
I asked a staff member who it was and she didn't know so she asked him and he drawled 'my names Joe.' I asked if he would start and he said he was a closer. I also asked who he played for and the answer was Texas.
I looked him up in the programme and he was called Joe Nathan and he earns $7,000,000 per year.
It was a bit like watching Man Utd warming up and asking Wayne Rooney the same question!
Really looked forward to watching him close out the game but we had to leave at the end of the 8th innings and he kept them in the lead in the 9th.
Final score 3-2 to Texas Rangers.
Good way to spend the day.
Posted by Christine at 10:33