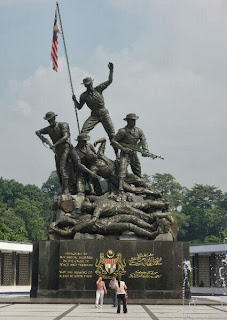 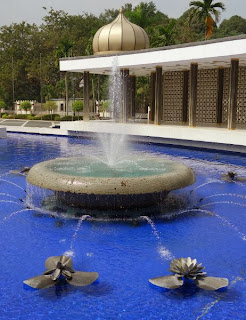 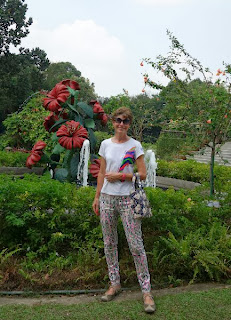 Went on a trek to the Malaysian National Monument that commemorates the soldiers who have fought in wars since 1914.
We had a map from Tourist Information that we knew was a bit dodgy, but it was a surprise to find that the lake shown near a large hotel on the map was nowhere near it in real life. Also, some of the attractions appeared to have been carefully spaced apart on the map, maybe to make it look pretty, but were actually all over the place.
We tried to follow the few signposts that were around but they took us in a circle and then stopped.
I was ready to chalk it up as a 'fail', but Darren was keen to carry on, and eventually I spotted the Monument on top of a hill behind some trees.
It was enormous and imposing, and the whole area was very peaceful. Behind the Monument was a lovely fountain and an area where poppy wreathes had been laid.
We then made our way back and managed to quite easily find the National Flower Garden (hibiscus), but disappointingly there were not many of them in flower, and the best one was a plastic one in a fountain.