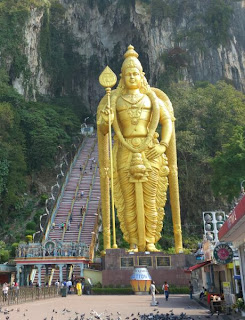 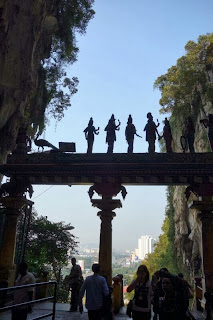 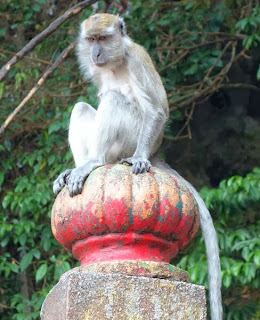 Caught a train 13k north of KL to the Batu Caves. It is a Hindu shrine and at the base of the 272 steps up to caves is a massive golden statue.
I was worried about the steps as there are lots of monkeys on them and they march up and down, looking for any signs of weakness amongst the tourists.
They are after food, carrier bags and shiny objects such as sunglasses, and are known to scratch and bite if they see something that they want.
Fortunately we made it unscathed and walked through into the caves.
There are stalls at the entrance selling pictures of Hindu gods that light up and flash in time to chanting music.
Further inside the roof is very high and there are also little shrines in dark corners with strange sculptures and candles. There are also temples where worshippers come to pray, as well as pigeons, cockerells and a few monkeys wandering around.