Little Ben and the Spotted Dog 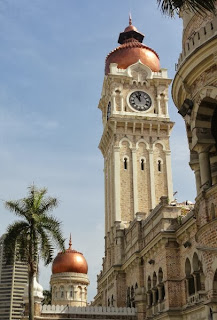 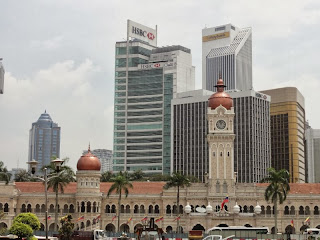 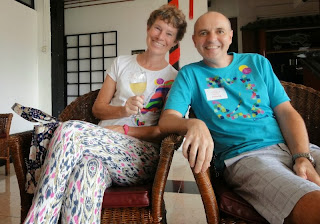 Went on a guided walk this morning around the Merdeka Square area of downtown Kuala Lumpur.
Most of the buildings were built by the British during the late 1800s and are clustered around a large grass square where cricket was played.
The original Government building has a clock tower and is known Little Ben - obviously after Big Ben in London.
We also went for a drink at the Royal Selangor Club, which is where the rich British settlers used to socialise. It originally was a men only members club, but it was eventually changed to allow women in.
Once they were admitted they used to visit with their dalmatians. (Sorry but I have no idea why they all owned spotty dogs.)  As dogs were not allowed they left them tied up outside of the club, where they were seen by all the passersby.
When the Club caught fire and almost burnt to the ground in 1990 the local paper had the headline 'fire at the Spotted Dog'.
No sign of any while we were there though.