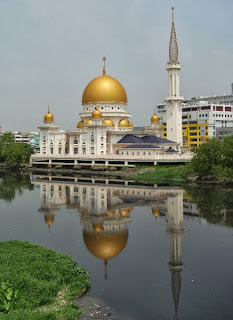 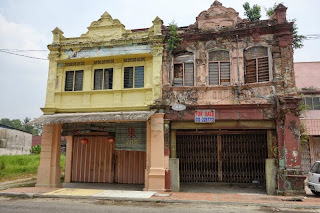 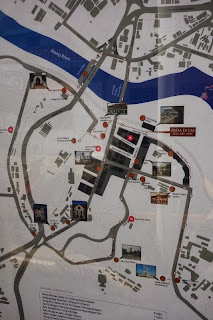 Klang is a town with a lovely name that is a 45 minute train ride from KL.
We decided to visit just because we could. There was nothing about it on TripAdvisor, so we were not expecting too much - which was lucky as we didn't find much.
Initially, first impressions seemed promising as there was a notice board outside the station telling us about its history, and a map of 17 other places of interest  together with a walking route.
Fortunately, I took a photo of the map as we couldn't find any more information about it.
The walk took us along busy roads, usually without pavements and across very fast dual carriageways.
We found a few of the attractions, but the river (which we found but was definitely not an attraction), was filthy and had loads of rubbish floating down it to the sea.
After about half way around the route there were no more notice boards and the last kilometre took us through an almost completely derelict area. I was drawn by the 'for sale' sign on one of the properties though.
I imagine that we must be among very few tourists ever to attempt this route, and we appeared to be the only tourists in town today.
We are totally anonymous in KL, but it was nice to be noticed in Klang and people waved, shouted hello to us and pipped their motorbike horns at us.
Not the most exciting day out ever though.