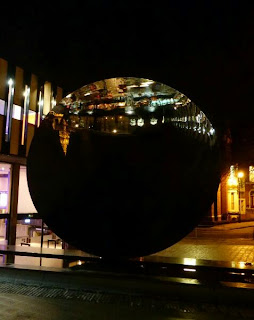 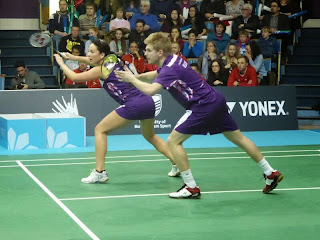 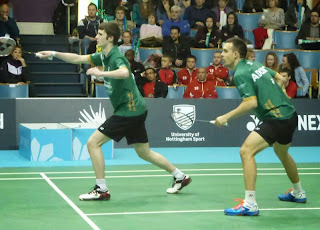 We designated 2015 as our year to see as many sporting events as possible. We have started slowly as we are nearing the end of January and we have only just got to our first one.
Our evening started well as we went for a quick pre sports wine at the Playhouse Bar in Nottingham and admired, for the hundredth time, the beautiful Anish Kapoor upside down mirror just outside it.
We are staying in Nottingham for a couple of weeks as my mum has just had a hip operation - it went well - so we went to see Nottingham play Loughborough in the new city badminton league at the Albert Hall.
It was a full house and we had great seats, and watched a fantastic display of fast paced badminton. We sat right at the front and our heads nearly unscrewed as we followed the action and the red hot shuttlecocks. Badminton is supposed to be the fastest racquet sport in the world and I guarantee that is true.
I tried to get some action shots but always miss timed them, so here are some 'waiting to receive serve' pictures, where the players have to stay still until the shuttle is on its way.
We were given free blow up clapper thingys and Darren enthusiastically got in the spirit of waving them about and hitting me with them, which got a bit wearing, but then one sprang a leak and deflated.
Ps, Nottingham won 4 - 1 in a very close fought contest. Also check out Chris Adcock in the third picture. He is the current world number six. Darren and I played against him and his mum in a league match when he was about 10 years old, but unfortunately lost to him - that's how good he is!