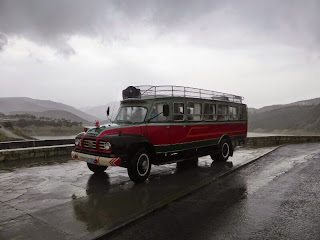 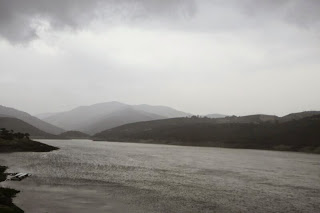 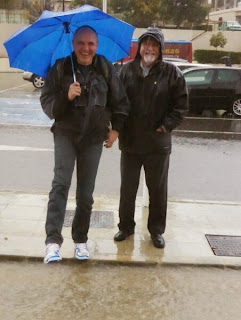 We went on an outing today into the Cypriot countryside. We travelled on a 1947 Bedford bus, together with our tour guide, 17 Finnish tourists and their interpreter.
A huge roll of thunder heralded our departure from Limassol and we headed up through Germasogeia to a reservoir.
The reservoir is very low and Cyprus currently has a big problem as they do not get enough rain to fill it.
The family had two very minor problems in comparison this morning, and both needed dealing with quickly and calmly.
The first occurred when I pushed open a little window on the bus to try to see the reservoir through the steam and rain. In the distance I was surprised to see a large wasp and within two seconds it was in through the window and buzzing angrily about.
The Finnish interpreter was just starting her spiel while I screamed and jumped about. Fortunately, the man sitting behind me leaned over, quickly bundled the wasp up in a little curtain and ejected it.
I sat in embarrassed silence as the Finnish lady probably deviated from her script and told the whole bus that I was an idiot.
The driver then took us to a car park as we were going for a scenic walk around a village. We all filed off the bus and the road had turned into a roaring river that we somehow had to cross. I took a run and jumped it, but Darren's dad wasn't quite so athletic.
Instead he rolled up his trousers and paddled through as the water went over the top of his shoes and socks. It wasn't quite the holiday paddling that we were expecting.
He then followed behind us looking like the an extra from the film Singing in the Rain.
Posted by Christine at 05:31