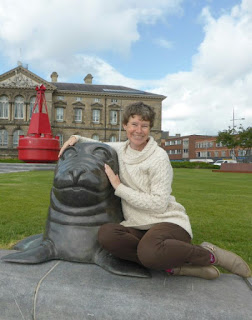 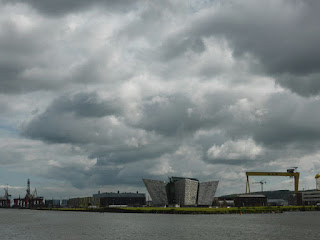 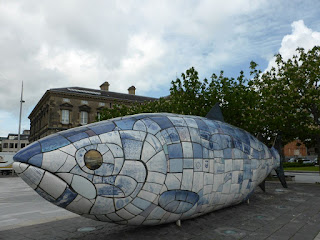 It's been a week since we spent a dodgy night on the Belfast docks and I haven't done a single blog in that time. We have had a traumatic few days, but this really isn't good enough.
We now know that nothing is going to be normal for the rest of this year, but the least I can do is put a brave face on, breathe deeply and carry on.
So here I am cuddling a giant sealion on the waterfront in Belfast.
We went on an outing and followed various signposts towards an art trail, a Titanic trail, a Cathedral quarter trail and who knows what else.
Probably the most famous thing about Belfast is that the Titanic was built in the docks here.  She was launched on the 10th April 1912 and sunk only five days later by an iceberg.  There is a huge museum dedicated to all things Titanic, see middle of picture two, although we didn't get round to visiting.
We did manage to spend some time in a trendy white loft style coffee bar in the Cathedral Quarter. It had a book of poetry by local poets on each table. I don't think that I have ever really read any poetry in my life before, but the author was also a part time dentist and I particularly enjoyed a surprising poem about her patients and their teething problems. I read portions of it out loud to Daz, and then our waitress brought us free pieces of ginger and lemon drizzle cake. No idea why she did this, but it was very nice of her, probably didn't do our own teeth much good though.
We also saw the giant Harland and Wolf cranes, called Samson and Goliath and a large ceramic fish.