Huge rush on today as we got back from the site, gulped down coffee while trying to simultaneity having a shower and make baked beans on toast.
Out into the dark drizzly night and on to the bikes for a quick cycle ride down to the station to catch the train to Oxford.
Arrived with ten minutes to spare to see Australian Pink Floyd at the New Theatre, along with hundreds of other people. 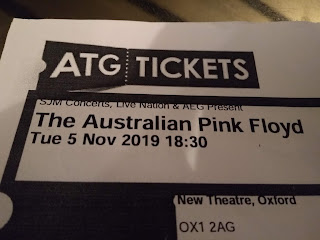 We were both surprised by the 6.30pm early start, so Daz checked the Internet and I checked the tickets. I thought that perhaps people in Oxford watch early shows and then go out for dinner later. Or possibly it attracts the pensioner audience who like to be home early.
Anyway, it was neither, and loads of other people tried to get to their seats, but we all found out that the doors open at 6.30, but it didn't start until 7.30. Everyone had the same reaction 'I had to miss my tea to get here this early'.
We shrugged and went to the pub. 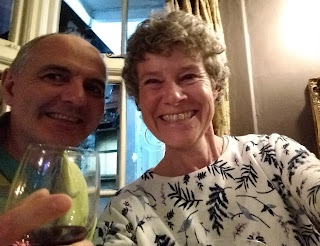 Excellent if belated concert, and the third time and third different city in three years that we have seen them.
Good to see that the giant bouncy kangaroo is still in action. 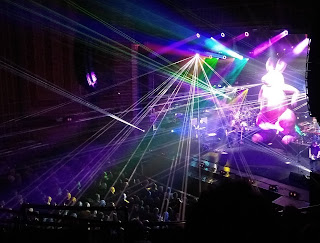