Today a lot of triple and even quadruple handling took place! Slightly dodgy sounding, but Trevor is very much against it.
Basically the idea is that things should arrive on site and then go straight to their final building place.
It is a bit of a failure if they then have to be moved again, and even worse if they are moved again and again.
Unfortunately the breeze blocks have been on a huge tour of the site and have ended up on the scaffolding.
This morning we ran out of breeze blocks and I put in an order for some more, but in the meantime the blocks needed to be moved to the garage to be used in the wall.
I was up on the scaffolding and after passing a couple to Trevor, he said to speed it up I should throw them down and he would catch them!
It was all a bit scary and they were heavy so I couldn't throw them far, but I have now got a new skill.
Sorry, no photos of it so you will just have to imagine the scene.
Instead I have a couple of photos from the back of the site, and we are still the smallest house on the street. 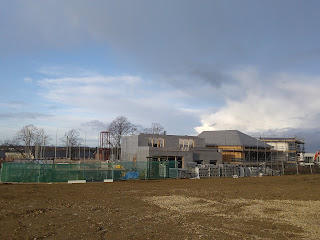 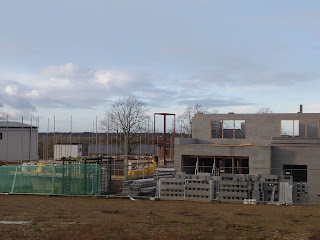