Putting in the joists

Torrential rain all night and we arrived at the plot to find nearly an inch of water in all of the rooms. I brushed a lot out but we still paddled around for the whole day. 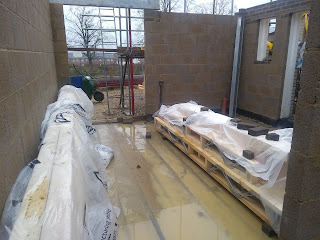 We hoped that the rain would hold off for a while so that we could make a start on putting up the joists.
While I went shopping (no, not for shoes or handbags), Darren started to set up his equipment. 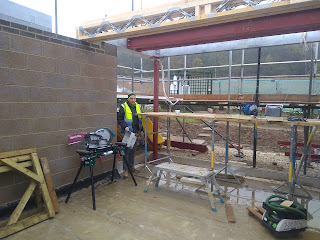 Trevor also arrived and between the two of them they started to lay out the joists using the noggin spacers that Darren had cut.
When I returned I took charge of the instructions that the manufacturer sent us and mostly stayed at ground level directing the operation.
Trevor was a great help as he had done this many times before, and just as it was starting to get dark we had the whole lot up. 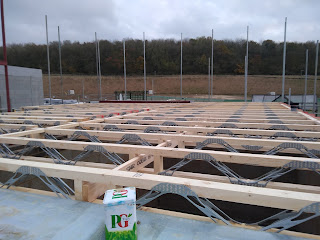 How neat does that all look?
PGTips box, builders own.
Posted by Christine at 09:24