It seems that all deliveries to the site are fraught with potential problems, and new ones appear daily.
Today I had another order for ten tons of sand, and I was casually eating my breakfast at 7.45 when the phone rang.
The lady delivery driver was only a couple of minutes away and just needed the final half mile of directions. I jumped around in a panic, got in the car and arrived to find her already there.
I opened up the gates and belatedly realised that Trevor's concrete mixer was in the way, but no matter how hard I pushed it, it wouldn't budge. 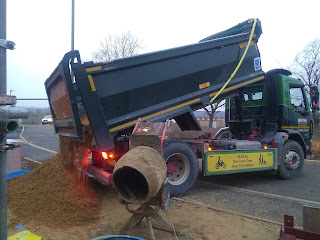 In the end I told her to drop the sand nearer to the road, so now I have a couple of tons of it on the pavement. I hope that Trevor manages to use it before the Health and Safety Guy puts in a complaint, but at least it didn't bury the mixer.
A couple of hours later two pallets of blocks arrived that I wanted putting up on the loading bay.
Yesterday the scaffolders had returned to give us a gate on the loading bay because the Health and Safety Guy had complained that the existing scaffold pole wasn't good enough.
Unfortunately the first time I tried to open the gate I found out that it wasn't a gate at all, but instead was a sort of huge see saw that rose up into the air. This then blocked the crane on the lorry from dropping off my blocks.
Darren was out shopping and the delivery guy was going to put them on the ground, but fortunately my hero Trevor came flying to the rescue and took part of the gate apart so that the pallets could land. 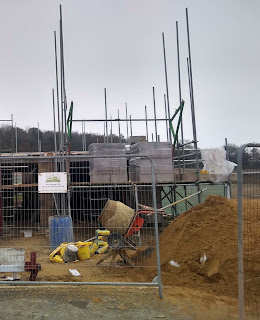 Just got to move them onto the first floor now to make way for the next drop off.
Posted by Christine at 09:40