A few weeks ago I noticed what I initially called a giant bobbin that had been dumped by the side of the road behind us. I now know that it's actually called a cable spool.
It had a small amount of very thick electrical cable wrapped around it, and we think that it had been used to wire up the lamp posts.
More time went by and it was still sitting there, so one Sunday I unwrapped the remaining wire and then took it back to my greenhouse. 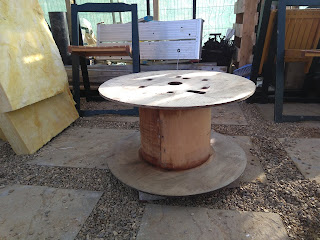 I left it to dry and then spent a happy few hours repairing it, wallpapering and then varnishing it.
It is now our new coffee table and I am very pleased with it, although for some reason I haven't managed to smile for the photo. 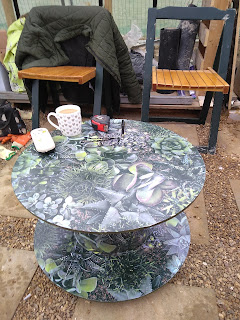 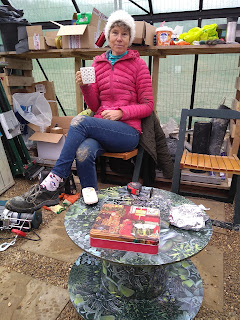 Ps, in other news it was another wet and windy day on site, but good progress made by Trevor on the house. Update tomorrow.
Posted by Christine at 10:32