Storm of the century

Apparently Storm Ciara is being called the storm of the century, and it certainly felt like it yesterday, and today now that I think about it.
We went to check on the house on Sunday morning and the wind was blowing like crazy. It had ripped off the waterproofing from the top floor and lifted a few of the scaffold boards. The plastic floor covering took a battering and a lot of water got into the house.
The wind had also tried its hardest to knock over the fencing, even though we had hammered metal bars into the base. I stood in the garden and pushed as hard as I could, while Darren was on the other side trying to get each panel upright before we braced them with bricks and more metal rebar.
Today was also extremely windy, but at the moment everything is still standing.
We did get quite a lot done today, and I used two brightly coloured Lidl 'bags for life' on the hoist to lift bricks up to the top floor.
Trevor was very amused by this, but I bet that he is taking notes and will be using this trick on his next build!
Sorry that the pictures are a bit boring, but it was not the day for photography. 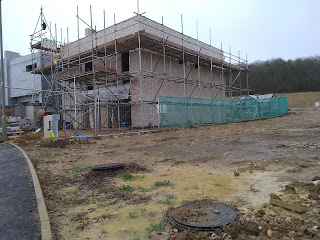 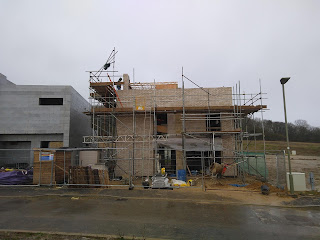