Up on the roof

We survived Storm Dennis over the weekend and after it had passed by we took all of the weather protection off the roof.
Disappointingly, a hailstorm appeared out of nowhere only two hours later and soaked the whole roof through.
Happily, the wind then blew strongly all night and it was almost dry when I arrived at the plot this morning. 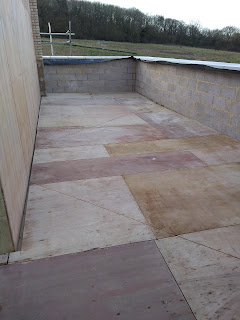 Take a moment to study the above photo and you can see that the roof is sloping at complicated angles. This is so that the rain water goes directly to the downpipes and doesn't hang around on top.
The cheerful roofers started work just after 8am and they quickly drilled three holes through the brickwork for the downpipes. 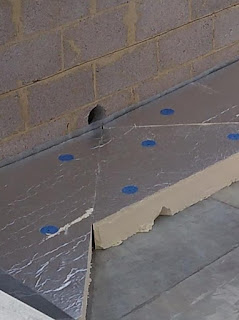 They have also put down a load of insulation and built an upstand all around the edge. 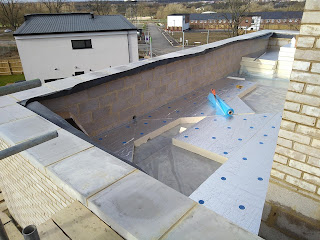 They haven't had time to get the final waterproof layer on yet, so fingers crossed once again that it doesn't rain tonight and they should get in on tomorrow.