We were expecting this event to be cancelled, but the All England badminton tournament went ahead yesterday as planned so me, Darren and Elaine made the journey to watch the action. 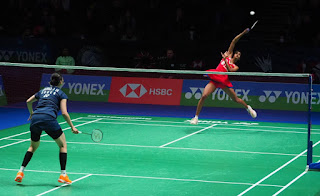 We sat in slightly uncomfortable seats from 11am until 8.30pm and enjoyed every minute. Thank you to Elaine for bringing the fantastic Marks and Spencer's picnic to snack on so that we did not have to leave our seats. 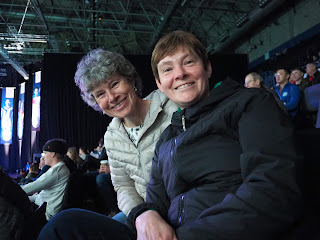 Not sure what happened to my hair colour in this photo compared to Elaine's, it must be a trick of the lights.
England had one pair left in the mixed doubles, Smith and Ellis and they had a great win against the fourth seeds from Japan. They then split up and played in the men's and ladies doubles and the men got through to the next round, but I think that the ladies were drawn against the number one Chinese seeds, but they went down fighting.
The most famous - possibly - badminton player of all time was in action in the men's singles and Darren took some good action photos. 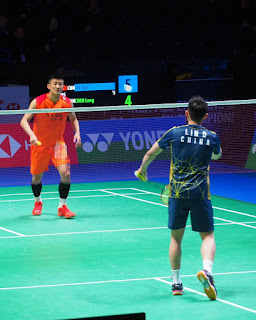 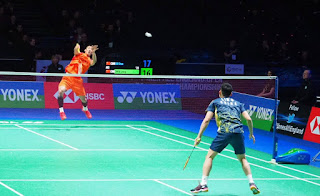 Unfortunately Lin Dan is a bit of a veteran now so lost to his successor Chinese Chen Long.
Fortunately the gift shop was selling tiny tee shirts of the most famous players, so Elaine bought a Lin Dan top for her cuddly penguin. She also bought a Lee Cheong Wei tee shirt for me and I am hoping that it will fit my childhood Teddy bear. 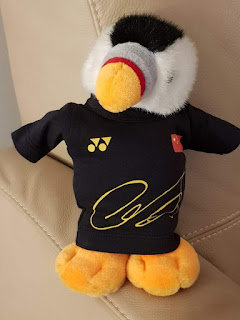 Ps, if you haven't already guessed we took a day off from the site, leaving our roofers to finish the roof. Unfortunately it didn't turn out that way because the site Health and safety inspector decided that what they were doing was dangerous and sent them home. I am pretty mad about this.
Posted by Christine at 08:18