Arrived on site nice and early and before I put my boots on the first delivery arrived. It was a stack about seven feet tall full of coily pipes topped off with cardboard boxes. 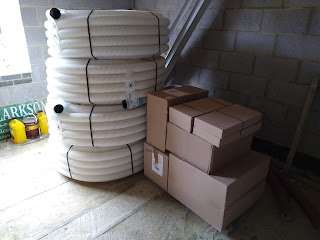 I got a stepladder to take it apart, and then we carried all of the bits indoors.
Just in time for the next delivery, which was the wood for our cladding all around the house.
The driver got his pallet carrier out and made hard work of trying to get it off the van. I started taking photos because I was so concerned that it might all over balance and fall off. He then changed his mind and we had to unload it all by hand, which took a while. 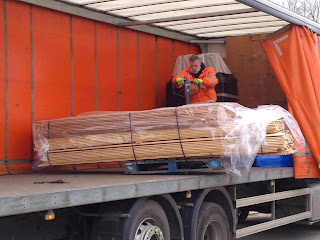 As soon as he had gone we started lifting it up and passing it on to the first floor through the front window. That took even longer and very tiring, so time for a tea break. 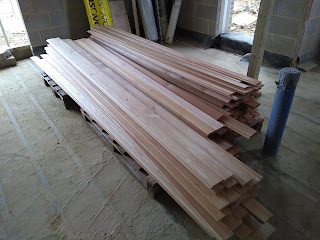 Afterwards I checked that the local tip was open, loaded up the car with rubbish and drove to it.
Got there and found out that it had closed, but is opening again in two days time, so we are now driving around with a very full car and no passenger seat. No, I am not going to unload it all and then put it all back in again.
Then another smaller wood delivery, and then something else in a huge box that was taller and wider than me. Don't know what it is because I haven't opened it, but it was addressed to us.
All this on a day when I thought that things might close down, apart from the tip which actually did, so we have loads of materials and are all set for a long time.