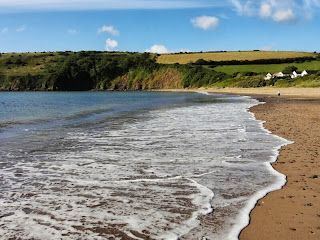 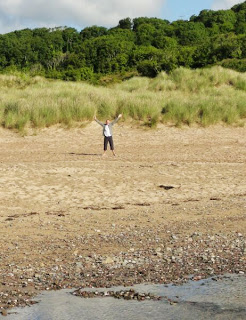 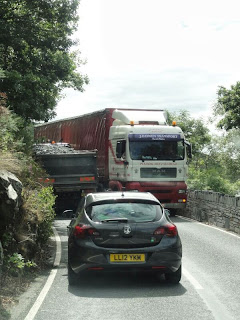 After rain overnight it was a lovely morning so we walked on the beach at Freshwater East before we set off on our nomadic lifestyle again. We have had to move so often recently as the seaside campsites have been pretty full.
We have driven up to north Wales and are now near Harlech. It was a beautiful drive but a bit of a surprise that the main roads were so small and windy.
We got completely stuck for quite a while at one stage. It was a very narrow A road and an artic and a lorry could not get past each other and traffic jams built up in both directions. Eventually one driver got out and helped the artic driver get past. He then sat in his cab, looking hot and bothered and smoking a cigarette. I was worried about getting past him but he said he was staying where he was and I managed to get round him.
It also got a bit dramatic at the campsite as I did about a 15 point turn to get the van into it's spot. I know how the driver felt and I am not going anywhere for a while now.