Rhossili and the Gower Peninsular 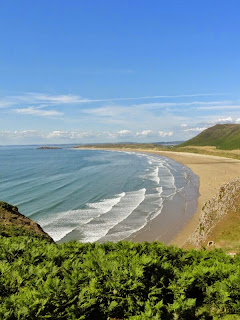 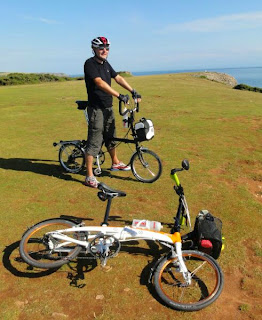 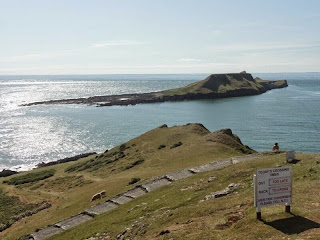 The BBC weather channel said that the sun would come out today from 12 o'clock onwards.
We had a double header outing today with the morning at Llanelli, lunch back at the campervan, and an afternoon outing, in the sunshine to the Gower.
We are staying at the east end of the Peninsular and we set off to Rhossili which is at the furthest point west.
It is an amazing place with the village high up on the cliffs and the beach down a steep path many steps below. We stayed up high and went to the end of the cliffs to see what is called the Worms Head (pic 3).
Apparently there is a path that can be walked along at low tide, but it looked very unlikely.  The signpost at the start of the path said 'too late to cross', so we didn't get to see it.
We stopped for a massive icecream and then carried on along the south of the Peninsular, stopping at another bay, then the Mumbles and eventually got back home.
We cycled just about the whole of the Gower and a new record distance of 104 k.