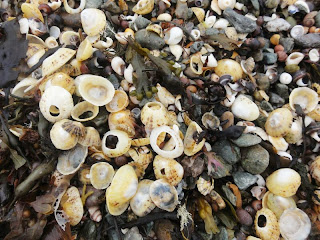 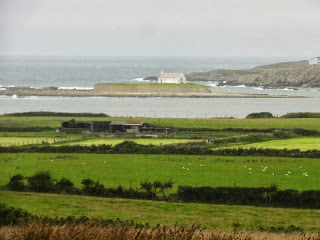 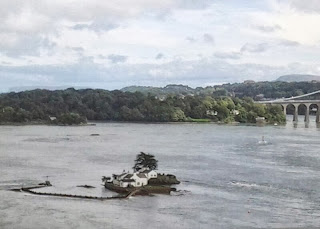 Atrocious windy and wet weather on our last day on Anglesey this morning, so instead of our planned bike ride, I picked the 'best walk' from a leaflet I had picked up.
The leaflet said 'A spectacular walk along the Coast Path from Aberffraw. Down the estuary around the headland to Porth Cwyfan and the tiny church on its tiny island. There has been a church here since the 6th century and at high tide it is surrounded by water.'
What it didn't mention is that sometimes the tide is so high that the seawater covers the path so at the start we had to climb along the grass verge in the estuary, and that the road in the village had disappears beneath the waves.
It got easier as the path along the cliff emerged and was on higher land so we made good progress for a while.
The signs then led to some steps down on to a beach and disappeared. The only thing we could do was clamber over rocks at the far end of the beach, although I was sure we were dangerously lost. The signs we were following were for the Wales Coastal Path and I thought there was no way it would be submerged at high tide.
I was wrong though and after a while risking life and limb, we found the path again and got to the bay with the church in the sea.
Dramatic and surprising, the church seemed to be on a man made walled island in the middle of the bay. Just like a massive version of a sandcastle.
Continuing with this theme, I was amazed as we drove off of Anglesey on the A55 and saw two little houses and a tiny harbour peeping out of the water in the middle of the Menai Strait.