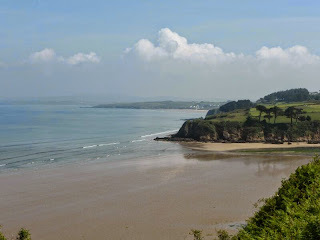 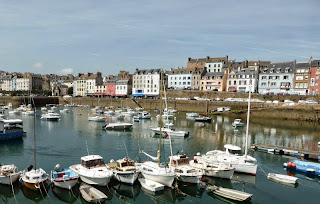 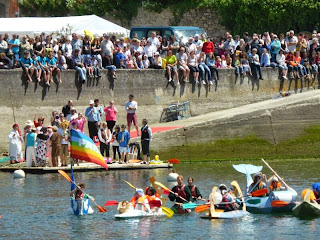 Our campsite at Locronan is 160 metres above sea level, so it was downhill all the way to the seaside town of Douarnenez.
As we got near the views of the Bay of Douarnenez were incredible, and for a change, the weather was perfect.
We then freewheeled down to the harbour where the sea was so clear that I watched the fishermen, their floats and the fish that they were hoping to land.
Finally, we cycled around to the harbour and came across hundreds of people, lots of whom were in fancy dress.
We had lunch and then watched the festivities. It was some sort of event that involved people making boats out of cardboard boxes.
We arrived at just the right time to see them being launched and raced around the harbour. A Hawaiian style canoe set off very strongly, and a boat called the Moby Dick tried to block it's way. Unfortunately, the cardboard whale then got a bit waterlogged and sank, as the crowd yelled and cheered.
Very amusing event, although slightly weird as the large group of teenage boys next to me were all wearing nappies.