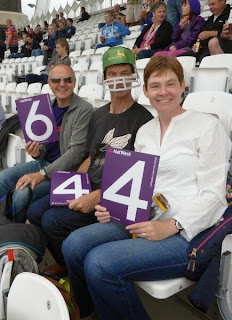 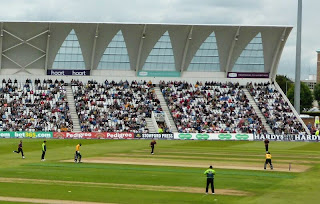 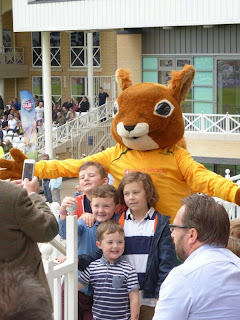 Spent the afternoon at Trent Bridge watching Notts Outlaws against Yorkshire Vikings.
On the way in we were handed the traditional 4 and 6 cards - to be waved whenever Notts scored the appropriate number of runs.
My brother in law, Mark, also took a cardboard Outlaws wicketkeeping hat, which unfortunately makes him look a little like Hannibal Lector. It took him ages to origami it into the right shape, then after a while the front section came undone so the look became even stranger, as it looked as if he also had green doggy ears as well.
The game was exciting, and made even more so by the giant wandering squirrel and lots of crowd participation. The kiddies in the photo had a long running singing competition with a big group of loud, Hawaiian shirt wearing middle aged men. I could have joined in as the song was just a tuneful 'Outlaws, Outlaws......., Outlaws, Outlaws, etc, etc.
On the pitch Notts started slowly, dropping lots of wickets and ending up 143 for 9. Yorkshire scored 14 runs in the first over and we seemed on for a certain thrashing, but for some reason they then fell apart and Notts took the win.
I was pleased as I have never been to see a cricket match where we haven't won, and I didn't want to start today.