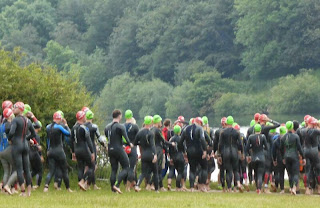 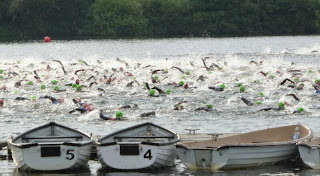 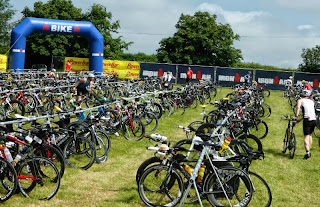 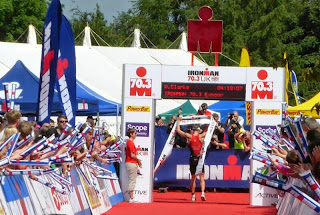 Sunday evening.
We arrived at Wimbleball (somewhere on Exmoor I think) on Friday lunchtime, and since then I have had no wifi.
I sent a blog yesterday  but it is still queued up waiting to send, so this one might arrive first.
We volunteered to help out at the Triathlon to see Ben, our brother in law, race. Unfortunately, the, management worked us so hard that I never even saw him once!
We were in charge of giving out teeshirts to the finishers though, so Darren gave him his well earned prize, and I gave him a kiss on the cheek.
We had some free time during the race and managed to see the swim start. There were two waves of nearly 900 competitors in each group, and it did look quite brutal, with arms and legs flying everywhere.
We couldn't see the cyclists out on the road as it was too far away, but we did see random competitors collecting their bikes and setting off.
I saw lots of runners out on the course and I watched the winner high five the crowd down the final straight, and finish in less than 4 hours and 20 minutes.
Great atmosphere all day and it was lovely to see so many happy people after the race.