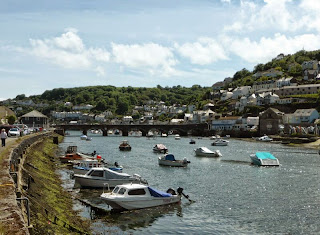 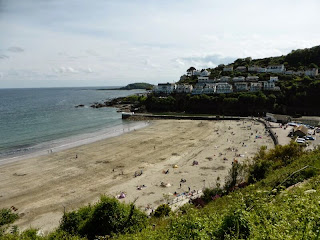 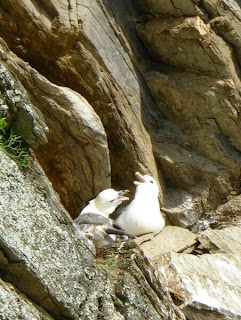 We arrived late last night in Looe, after driving for an hour from Plymouth ferry port. The roads were deserted, the roads twisty turny, and when we got to the campsite it appeared to be in the middle of nowhere. We had made an arrangement with the Caravan Club for a late arrival, which meant that we could park at the camp entrance, hook up to their electricity and use the shower block. There was not a soul around and it looked worrying.
Fast forward to this morning and all is well. We had a warm welcome from the camp staff and there are two halves to the campsite. The main site cannot be seen from the road, there are loads of other vans down here and we even have a sea view. There is also another shower block that everyone else is using, so we will carry on walking the extra distance to our own private facilities.
We walked down to Looe this afternoon and it is pretty, with lots of hardy folk who appeared to think it was bikini beach weather.
On the walk back we took a detour and saw a northern fulmar nest with two large chicks in it. The parents were flying around collecting food for them.
Apparently they are extremely rare and there are only 50 pairs in Cornwall, so we were very lucky.