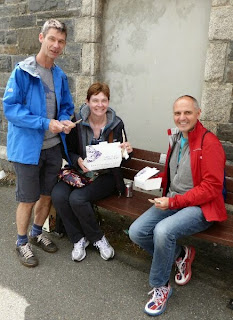 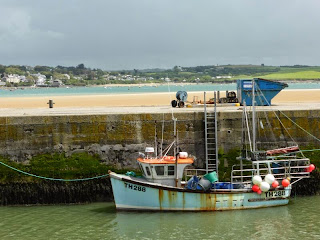 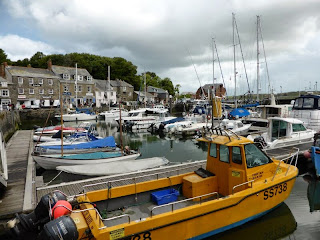 Went on a day trip to Padstow today with Elaine and Mark. Apparently it is known as Padstein, as the whole place is gradually being taken over by Rick Stein - TV chef, entrepreneur and fish fan.
It is a lovely village full of quaint and attractive shops, restaurants and calorie laden treat options. Rick appears to own at least two of all of the above, and we chose to buy our lunch from his fish and chip takeaway.
We ate it sitting on a very unglamorous bench behind the harbour, so maybe Rick's next venture should be a pretty picnic area for his customers.
The food was a cut above a usual takeaway and came with a slice of lemon, sprig of parsley and a wooden knife and fork.
This is our second fish and chip dinner this week, the first one was from the top takeaway in Bude - according to the local Scout group. My fish was covered in a huge inedible soggy blanket. I think I should get in touch with them to tell them to take a trip to Padstow to try Rick's, as his batter was crunchy, tasty and perked the fish up no end - much better chips too.
Ps, we have a third fish and chip outing booked in for Thursday so I may end up a bit of an expert, and put on some weight.