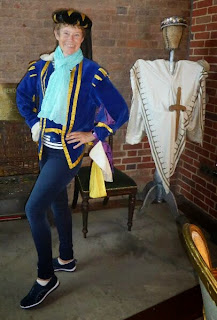 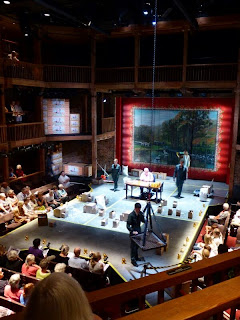 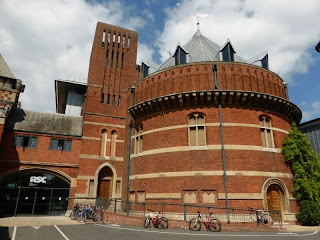 On Thursday we booked theatre tickets at the Royal Shakespeare Company for the matinee performance today. The box office was quiet at the time, so we had chance to ask our important questions before choosing what to see, as there are two theatres in the one building.
Darrens question was obviously 'which is the cheapest?' They both had 'standing only' tickets, which apparently hardly ever get sold for £5 each.
We then moved on to my question - obviously, 'which one is the shortest'? One lasted three hours and the other was one hour 40 minutes, so it was a no brainer.
Unfortunately, it meant that we missed the Shakespeare play called Henry lV part one, but it seemed too much like a punishment than a potential pleasure.
We went to see 'Arden of Faversham', which was written by a contemporary of Shakespeare, so we got the funny language, but without the length. Actually, it was excellent with a plot that we mostly followed, and some real laugh out loud moments. I was quite sad when it finished, but pleased that we were then due a long sit down.
This came in the form of our next event - a free outdoor staging of 'The merry wives of Windsor' (one hour 20 minutes) in a neighbouring park.
It was a on a raised stage with lots of people on sitting on picnic blankets watching. There was a footpath between the stage and most of the audience, and it was very funny how many people just walked across in front of everyone, so there were lots of distractions.
The actors were in modern dress and very loud and cheerful. They were also quite manic at times, leaping out in to the audience, and some of them played multiple roles, which added to my confusion. It did start to make a bit of sense towards the end, and we managed to work out the plot on the walk home.
Fantastic afternoon, and there seems to be live Shakespeare all over Stratford for the whole summer, so we will have to return and continue our education.
Ps, there was a dressing up box on the way in that I couldn't resist.