We caught a little train from Chamonix this morning to Vallorcine and then walked along by a lovely stream to Le Buet. We chose this route deliberately because it was flat and our thighs were protesting loudly about their treatment yesterday.
Unfortunately, it was then uphill for about twenty minutes to the waterfall. Once we got there my pains were forgotten as fear took over.
We climbed down a few steps and onto a metal walkway that hovered many metres above a raging torrent. 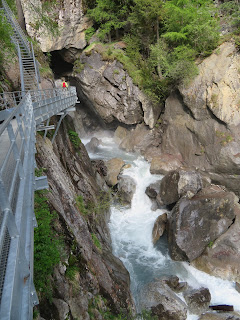 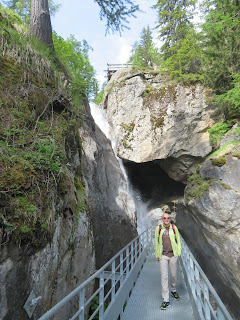 I was quite pleased to get off and then headed up to the top of the waterfall for a sit down and a cappuccino.
Afterwards we walked over the Col du Montet and then down into Argentiere. 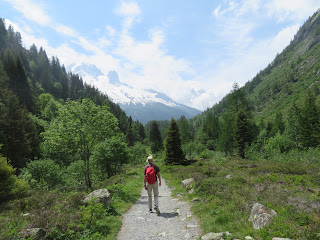 In the afternoon we walked around Chamonix in blazing sunshine, but less than two hours later the skys darkened and within seconds a blast of wind shot through the hotel. All of the windows were blown wide open and then slammed shut and hailstones rained down.
Unfortunately Daz had his washing out on our balcony although he managed to rescue most of it, but one of his hiking socks is lost forever.