Up nice and early again on Sunday ready for our last event at the Runfestrun.
We packed up the tent which put up quite a good fight as we tried to fold it up and then get it back into it's bag.
We then put on our ladybird teeshirts and glasses ready for the Bug fun run. 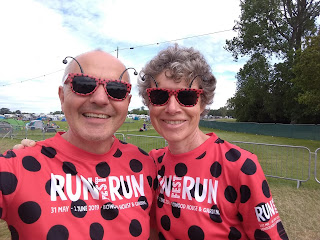 I wasiin the middle of a shopping opportunity at the many interesting stalls when my phone rang. Our next door neighbour was calling to say that he had heard strange knocking noises coming from our house and it had been going on all weekend.
We had no choice but to set off home straight away with my imagination going wild. Would the house be flooded, had squatters moved in and were putting up dozens of pictures on the walls, had the dishwasher somehow gone crazy in our absence?
No, it was weirder than all of those things - my new and very tiny solar fountain had emptied the water out of it's container and was desperately pumping air up into the air instead, and doing it very loudly! 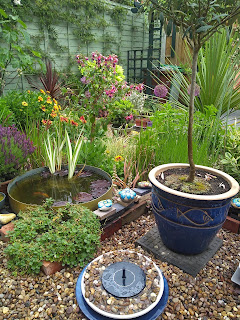 Will have to be especially nice to Daz for the next few days to make up for this fiasco.
Posted by Christine at 09:52