The window company rang yesterday and politely asked me if it would be convenient for their surveyor to call round today to check our measurements. She apologised for the short notice, and it was a very exciting development.
At 1.15pm today Darren put the final board in place so that the window spaces were all finished. 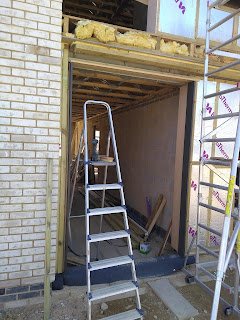 Half an hour later the surveyor arrived and went around the house carefully measuring each opening.
Tension rose, but each one was carefully ticked off and eventually he announced that they were all good.
What a result for Darren who has spent ages sorting it out, and for me who had to try to make sense of the checklist that they sent us.
Unbelievably, the surveyor then said that the company would be sending three or four teams of fitters this Friday. He also said that 'hopefully they would smash most of the windows in by the end of the day'. A very worrying turn of phrase indeed.
The house is a complete mess with insulation, wood, paint, tools and rubbish everywhere, so after a celebratory cup of coffee I gave up on my job of digging a new drain and got on with a spring clean. 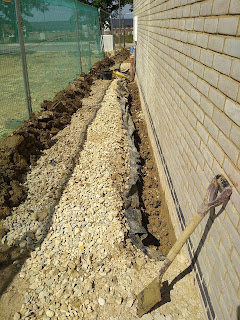