Woke up this morning to our final day in London. The weather forecast was not good, and we had nothing planned so we decided to walk back to the canal to see where our run went wrong yesterday.

We soon got to the Kings Cross end of the tunnel and the canal disappeared in to it. 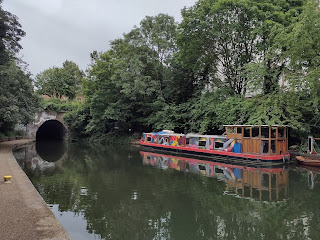 Just above the tunnel was a map showing how to get to the other end overground, so we set off through a modern housing estate to try to find it.

After about ten minutes we found a huge pair of wings in a shopping centre. 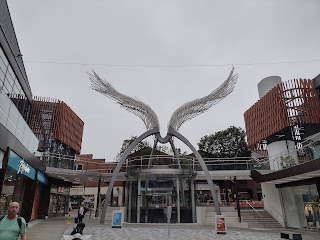 This made me wonder where and what was the original Angel of Islington. I looked it up and there was a very old pub called the Angel Inn.  By 1614 the area around it was already being called Angel. Unfortunately the pub no longer exists, but its name lives on.

Angel is on a bit of a hill, so the canal builders had to decide whether to build a series of locks, both up and down, or a tunnel. Obviously the tunnel idea won.

A competition was held in 1815 for the design of the tunnel but all of the entries were disappointing, so the engineer decided to design and build his own, which to my untrained eye, also looks disappointing.

However, it is still here and does the job, so I shouldn't really criticise it. 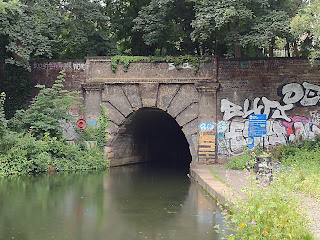 Shame about the graffiti, and it is a lovely walk along the towpath.

Caught the early train home, and the garden has grown massively in the past week.