It was a much calmer day today, although it started out as quite hard work. We got up fairly early and got on a bike. You only get 30 minutes free on the cycles so we changed bikes three times before we reached our destination of the Limehouse Basin. 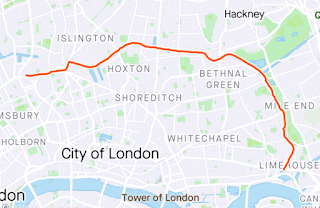 That's in the bottom right of the map and the start or end of the Regents Canal. We then set off running along it back to our hotel. All was going well until we got to Islington and the canal disappeared into a tunnel.

We ran up on to the street expecting the canal to appear again. There was no sign of it and then we saw a road sign for cars saying Kings Cross, so we followed it and ran along the main road. Quite unbelievably, about ten minutes later we recognised our hotel.

Then we went to the Banksy exhibition at Covent Garden. It was very good and right at the end was an area for you to create your own Banksy.

I tried the one with the little girl who lets go of the balloon. 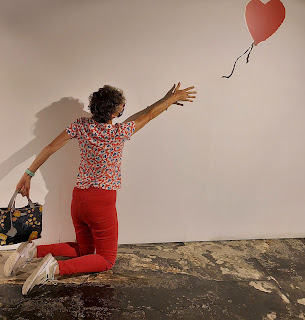 Afterwards we sat in very comfortable deck chairs in Berkeley Square and watched the tennis, while we waited for our friends Margs and Dave to arrive. 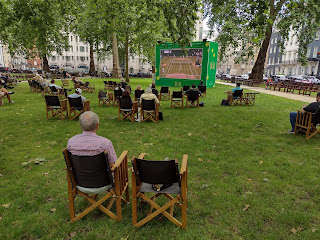 We then all went back to see the elephants again and they were even more magnificent this time. The sun was out and a flock of exotic birds had landed on some of their backs. Actually that's quite a small one. Later we all went for a curry and a glass of cider or two.

Ps, I have looked at the map more closely and the canal disappears into the Islington Tunnel which is about a kilometre long. It runs right under Islington before appearing again and carrying on quite near to our hotel. We hadn't noticed this little fact when planning the running route.