8.51 this morning and we were in the queue to visit the Tower of London. 9.00 am and we were in and running through the ramparts on the way to the Crown Jewels exhibition. 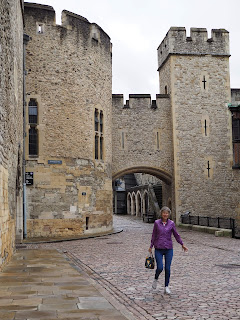 We were the first people inside and had the place to ourselves, apart from the helpful guides who pointed out the Cullinan Diamond in one of the crowns, which is the biggest diamond in the world. We saw fantastic crowns through the last 400 years, incredible swords and sceptres with more huge jewels embedded in them.

Best of all though was a metre wide gold punch bowl, made I think for George IV, although he died without ever getting the chance to use it. No photos allowed inside unfortunately. 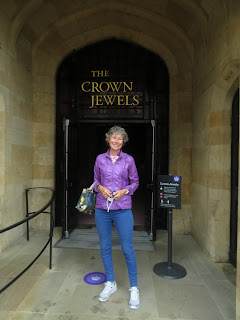 After that there was loads of things to see, and hardly any other tourists in sight. 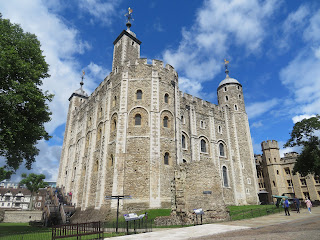 For hundreds of years, wild animals were kept by the various kings around the castle, including a polar bear that used to go swimming and catching fish in the river Thames, lions, monkeys and elephants. They often died because no one knew how to look after them properly, and this elephant statue gives a clue where they probably went wrong. 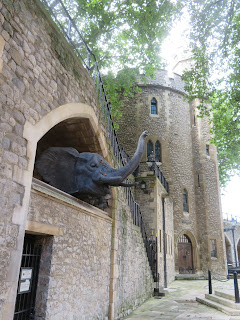 We got very close to a raven called Jubilee and he and I had a little conversation. He started it by saying cuckoo, so I said it back to him, and he said it again while flapping his wings. I said it again but had no wings to flap. He said cuckoo again and flapped, I said it again and didn't. This went on for a while and it was maybe not on a par with Dr Doolittle, but it is my first successful attempt at talking to the animals. 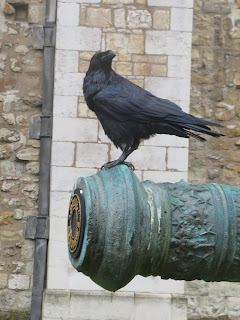 After the Tower of London, we went straight next door to Tower Bridge, climbed over 200 steps and had great views of the river. We have been here before, but since our last visit they have put in a glass floor that Darren really enjoyed, and I didn't. 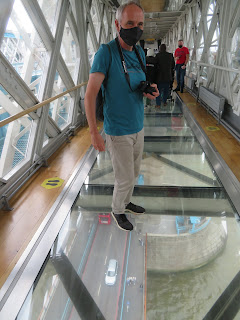 Continuing on, we hired Boris Bikes and got soaked through in a sudden shower on our way to Westminster Abbey. Cold and hungry we couldn't find the entrance and then when we eventually did, it turns out that it was closed, although it didn't say that on the website.

After a reviving lunch and a quick rethink about how to spend the afternoon, we got back on the bikes. Immediately another shower hit, but we sheltered until it was over and then cycled a surprisingly long way to the Chelsea Physic Garden.

We arrived just in time for a guided tour and found out loads about poisonous and medicinal plants. We had to leave mid tour as it started to look like rain again, so we rushed back to our bikes. I only had time to take one photo while we were there. It was of an exhibition that we didn't get to find out a thing about, but it included nice giant apple halves. 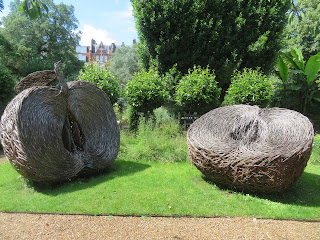 We didn't even get as far as the bike rack before we got soaked again, so instead decided to get on the Underground to take us to Regents Park.

Drying out we went to the zoo. It was eerily quiet, non of the shops or kiosks were open and most of the animals were strangely missing. How could such big things as the giraffes and lions be absent? No sign either of any hippos, but they were pygmy ones so maybe that helped explain it.

We did see what looked like a cross between a giraffe and a zebra that might have been called an okapi, which was interesting. 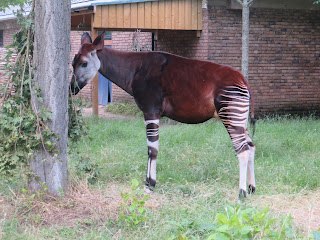 A couple of the smaller animals put on a good show and the otters chirruped away to us and followed us up and down the path. 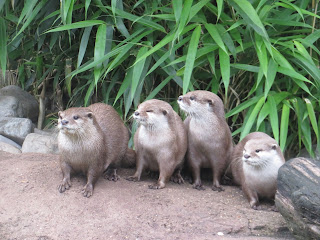 The penguins were nice, but we preferred the wild herons that wandered about fishing in their pond. 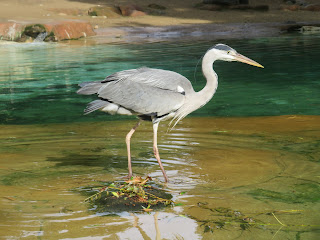 In summary, probably not the best zoo visit ever, and we left ten minutes before it closed and headed for the bike racks. Just as we were getting on them a massive storm erupted over our heads. We waited it out under a tree and then decided to walk to a restaurant under our umbrellas. Halfway there it started again and we got really, really soaked this time.

Had a good dinner and then squelched back to the hotel to try to dry out our shoes and socks.