Off on a tour of Marrakech with our group and guide. It's a beautiful morning and not too hot. 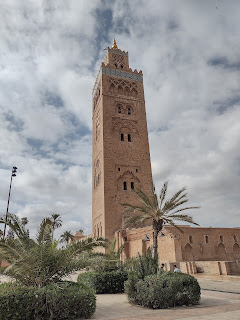 First stop was the Koutoubia Mosque which dates by to the 13th century. Our guide told us that after people worshipped there for the first 100 years they found out that it was not facing towards Mecca.  Quite a disaster really, but they seem to have rebuilt the ground floor but left the tower as it was.

Next past all of the horse and carts waiting at the Jemaa el-Fna Square. This is a photo taken a bit later of one of them as viewed through an arch in the city wall. 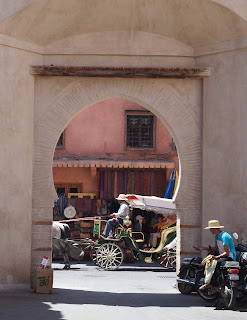 It's supposed to be a bit arty and I kept pressing my camera button either too early or too late, so this is one of Darren's pictures.

The Square whose name I can't pronounce was quite empty as it was quite early in the day, but I spotted a sad looking monkey on a chain and stayed well away.

Then our guide took us into the souks and backstreets for a very long time. 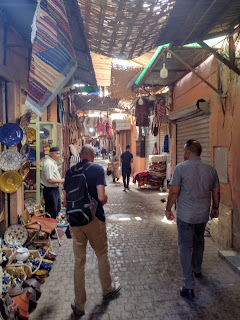 Eventually we emerged into the daylight and went to see the Bahia Palace. It is a beautiful place that was built by the Vizier for his first wife called Bahia. Apparently it means 'beautiful' in Arabic and she was his favourite and had her own private quarters in the Palace.

Unfortunately she also had to live with his other three wives, and his hareem of 20 other ladies. Our guide didn't tell us what she thought of that arrangement. 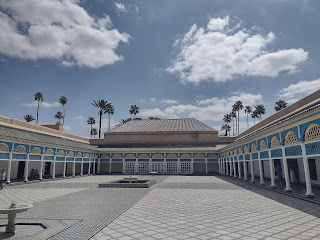 This is the hareems rooms. 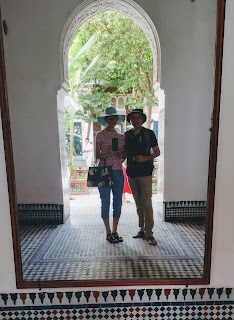 Selfie with Bahia's garden in the background. 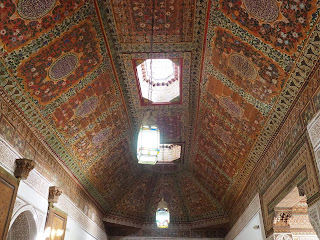 Finally our last stop was the oils and spice shop where the salesman did a great pitch, but unfortunately we are a cheap group and only one lady bought some hibiscus tea. 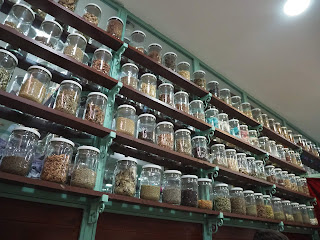 The afternoon saw us drive the 200 miles to Casablanca and we have just checked in to our hotel.